Treasure hunting is one of the core mechanics of ATLAS. By following maps and fighting the Army of the Damned that guard the buried rewards, or dredging sunken treasures from the briney deep. Pathfinders will be rewarded with many rare items and Blueprints.

Treasure maps are obtained from bottles washed ashore on every islands. As with other items they come in a variety of Item Rarity.

Bottles will randomly appear along the shoreline of every Islands. The quality or amount of bottles have nothing to do with any player stats. Contrary to popular belief that Intellect increases the map quality. The quality increment of the map compared to the bottle quality is 22.4%. The only exception of the 22.4% increment are the Boosted maps.

Once you have a map hovering over it in your inventory will display the gold it is worth, and the region to find the treasure in. Simply go to that region, match up the map location to the matching location in that region, and dig with a

Shovel after killing the Army of the Damned who are guarding the treasure. Roughly 20 will spawn at varying levels, depending on the level of the map. Archers, soldiers, and warriors are the types that will spawn. Archers should be taken out first if possible, then soldiers should be ganged up on because they are shielded an often you will just glance off their shield instead of hitting them. Beware of warriors, they hit hard and can hit you as the player on your mount. It is HIGHLY recommended you bring mounts (lions work the best, elephants are good for pushing them back however.)

Note: There is a timer for killing the army, which doesnt visually appear but it seems to be about 5 minutes in length.

Note: Army of the damned will go underground to regain 100% health if you dont kill them quick enough.

Item Rarity of loot varies based on the rarity of the treasure map. Although it can vary randomly up or down.

Once you are close to the location on the map a beacon will appear on the ground representing where to dig. Once you approach the location, Soldiers of the Damned will rise out of the ground and attack you. Killing the Soldiers of the Damned will allow you to then continue digging for the treasure. The difficulty and number of the Soldiers is based on map rarity (gray, green, blue, pink).

Ranged weapons are to kill the Guardian, while avoiding its melee stun mechanic. Aim for the face to bypass breaking the armor. Stay somewhat close, getting too far out of its range while using a ranged weapon will cause it to sink back into the ground and reset.

Riding tamed animals can also help defeat the enemy with the help of the healing or damage feats from beast mastery tree.

There seem to be two theories behind bottles not yielding a map when picked up: 1) Empty bottle is a result of a hidden spoil timer on the bottle and it has not been looted within a given time from when it spawned or; 2) You have too many quality maps in your inventory or in nearby inventories. Move all maps a decent distance away from the bottle before looting, this includes mounts and ship inventories carrying them.

Further testing needs to be done as results aren't extensive enough to be definitive.

Sunken treasures can be found under the ocean. Their location can be spotted by broken parts of a ship, which are floating on the water surface. The treasure itself is far below the broken ship parts on the ground of the ocean. You will need a

Diving Attachment to get it. When you get to the bottom of the sea, you'll find a shipwreck where you'll need to find the right way through to find and get the sunken treasure.

Sunken treasures always contain gold and at least 1 blueprint, but sometimes they also contain a random structure with random quality, or some type of food. 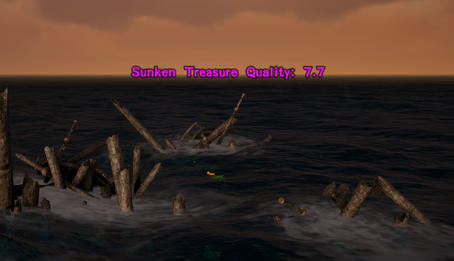 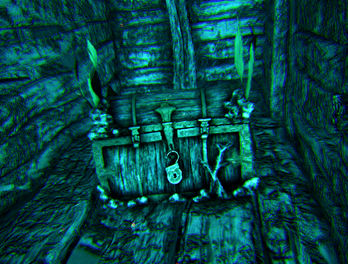 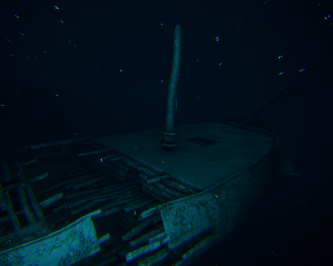