The Submarine is a new underwater vehicle in ATLAS added in the Update v1.5/v100.1

Explore the depths of the ocean in this small scouting submarine. Use the claw arms to help harvest the ocean floor and explore (demolish) shipwrecks.
Also equipped with a harpoon (uses

Ballista Bolt ammunition) as a new underwater weapon which will ramp up oceanic combat.

Anyone may ride in a Submarine as a passenger, release, retrieve and repair a Submarine from the Ship Hanger. However, the Kraken must be killed to unlock the ability to craft and operate a Submarine.

The Submarine is crafted and repaired inside the

In addition to some basic materials (listed on the sidebar), the Submarine requires:

Base gems, crystal & alloy cannot be used for crafting a Submarine, but can be used for repairs. 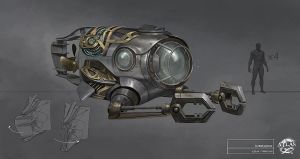