Sperm Whales are one of the aggressive Mammals in ATLAS. There are Monstrous Sperm Whales which can only spawn in the polar regions and there are casual Sperm Whales, which can only be found outside the polar regions near the ground of the ocean. The later ones are very hard to find. Avoid sailing into their path as they will damage your ship and destroy it within seconds. If killed the first time, it will grant a Discovery along with a new passive that grants you a 30% Extra Taming Affinity Boost. This boost can be very handy, if you are excited about taming many animals.

Aggressive Sailing your ship into it will cause severe damage to your ship. Potentially worse then sailing into a Stone Structure...

Sperm Whales are very large creatures, that have a frightening big mouth with many sharp teeth.

Gold Coin once you have obtained a

Ballista and NPCs on the back.

Gold Coin depending on level and type.

Can hit with both mouth and tail. Damage radius is quite large. Hit for 3k5 or more. When dead, counts as static, solid object and can damage boat upon approaching too closely.

Monstrous sperm whales likely spawn in the polar regions from I9 to J10 (needs to be confirmed). 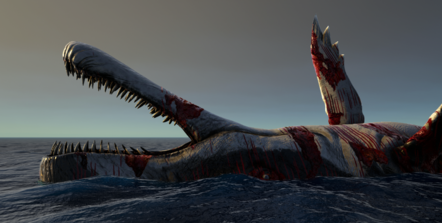 Loot of a Monstrous Sperm Whale