As part of the Unified Community Platform project, this wiki and 38 others will be migrated to the new platform in the next few weeks. Minimal changes are expected as part of this migration. Read more here.

The sloop is the cheapest ship you can create on the Small Shipyard. It has one deck and can hold a maximum of 2 small sails or 1 medium sail. Sloops are one of the small Ships in ATLAS.

Build and place Small Shipyard. Ensure that there is sufficient depth of water. Sand bars and rocks may result in the ship being destroyed as soon as it is launched. Once placed, the shipyard can be used to construct the skeleton of the sloop which forms the base for placing additional components.

After the skeleton has been crafted, it will appear in the shipyard. Once the skeleton is in place, additional components (decking, sails, etc.) are placed on the skeleton like placing walls on a foundation. The following table lists the required components.

A sloop may be constructed with two small sails or one medium sail. A single Medium Speed Sail makes the sloop quite fast, able to outrun Ships of the Damned given favorable winds. However, care must be taken due to loss of handling characteristics.

If Wood Ceiling Doorways are used, chests and preserving bags may be placed inside the hull, leaving the decking clear.


Additional Crew : +1
Increases the total number of passengers allowed on the ship.


Damage : +4%
Increases damage of cannons and all other ship weapons.

Resistance : +8%
Increases the resistance of all the structures on the ship. 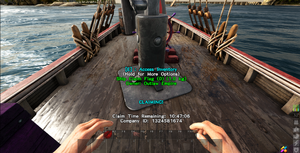