Opal is a resource under the generic

Gem type of resources. All the non-generic resources of this type are:

The various resources within this type are interchangeable for crafting common items. For crafting higher-quality blueprints, you will need to include two or more of these named resources, but not the generic resource.

Since the generic resources are all you can harvest at freeports and is all you will receive when you demolish structures, you will need to explore the game world in order to find many versions of resources of each type to build high-quality items and structures once you have looted some good blueprints. Emerald nodes appear alongside Emerald and when viewing either node using the H button they will incorrectly display as Crystal. Once harvested they will be Gems in your inventory. 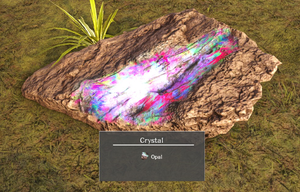 Opal is used in the crafting of the following items or where any Gem can be used in a recipe:

Opal in the regions linked in the chart below. Please store specific location information in the pages for the regions where you have found it. (How To Add a Region) 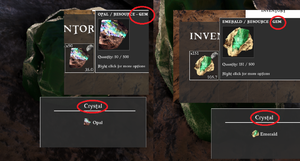 Both Emeralds and Opals show as crystals on the ground but as gems once harvested.