Guillotine is a execution device similar to the

Hanging Noose, but adds additional Curses to the player executed.

As of Patch 402.5 Removed all XP gains from the guillotine and noose. 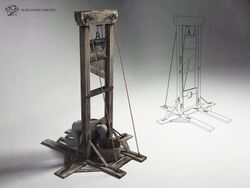