Giraffes are one of the docile Mammals in ATLAS.

Giraffe is a great

Thatch harvester, with a 6x harvesting bonus and a 25% reduced weight. Giraffes also harvest a lot of

Wild Vegetables, but only a small amount of

Wood. They cannot, however, harvest

They have a few other nice benefits:

Of course, your actual sustained travel speed will be determined by your mount's stamina and the obstacles in your path. While a Giraffe isn't the most agile animal out there, it's long legs can walk right over obstacles that would block shorter animals. They also allow it to walk right through some shallows that a shorter animal would have to swim through. Its heft will also allow a Giraffe to knock down trees and

Bamboo that might stop a lighter animal. And its stamina drains fairly slowly and it recovers its stamina extremely quickly.

Taming a Giraffe can be tricky because of their long, cleaving horizontal attacks while they are trapped in a bola.

You may feed the Giraffe a wild beet every 20 seconds when you approach their face. In most approaches, the Giraffe will swing his neck and try to headbutt you. The impact will cause a manageable amount of damage and knock you back.

Try to make sure you don't have any other wild, aggressive animals around. Sometimes the knockback from the Giraffe will hit you into an aggressive animal in the area which could potentially ruin your tame.

You will need either farmed Beet (best), Wild Beet or other Farming crops to tame it.

You can breed Giraffes in the following biomes: Eastern Tropics, Western Tropics, Equator and High Desert. Acceptable temperatures for mating and offspring are between 26-44°C (79-111°F). Your newborn Giraffe will be ready for you to claim it after 5 hours and 45 minutes.

It will eat from its inventory one

Chili (or similar food) about every 45 seconds. A newborn can only carry enough weight to hold a few units of food so you won't be able leave for very long between feedings. Once it can hold more, each full stack should give you 1 hour and 15 minutes away from baby.

About maybe 6 hours and 20 minutes (discuss) after the baby is born, the maturation meter will reach 10% and the baby will become a juvenile. After that point, the young Giraffe will better handle temperature swings and it will be able to eat from a

Feeding Trough, allowing you to leave it alone for longer periods of time.

When possible, arrange to raise the baby someplace that won't stay too far above its comfortable temperature range for too much of the day. It is easier to heat an area than it is to cool it, so keep that in mind when setting up your nursery for each species you breed.

To keep the baby warm enough, have plenty of

Torches in them mounted around the floors and walls in the fully enclosed area where you will be raising the baby. Maybe also install a

Lever set to the same PIN as the hooks so you can trigger them all at once if you like. This will help you keep your young pets alive during any cold spells.

If you need to cool the area, you will need to use

Ice Boxes. To power them, you will need to have visited a frigid region ahead of time and stockpiled enough

Ice to keep the boxes active until the heatwave passes.

Beyond the initial imprint when you claimed your newborn, you can also gain a very useful imprint bonus by cuddling with your new friend. The cuddle timer ("Wants Care In" timer) is eight hours. Cuddling or taking a walk with it as soon as possible each time the timer elapses will increase your new Giraffe's stats. It will also provide a nice rider buff once you can saddle it as an adult.

A 100% imprint will give an additional 30% damage and defence bonus while the pathfinder that imprinted on the animal is riding it. If you can't arrange to increase the imprint every eight hours, don't despair. You'll still get a bonus based on whatever imprint bonus you did get while raising your new little friend. For example, a 50% imprint bonus will still get you 15% more damage and defense; it's not an all-or-nothing thing.

Successfully raising a high-imprint offspring—or even just keeping your new buddy alive at all—can take quite a bit of time and good scheduling. So here is a rundown of the relevant times to be mindful of:

Giraffes can attack with long sweeping headbutts (Left Mouse Button), or with a stationary trample attack (right mouse button). They also possess a "trample" effect that will deal very slight damage to smaller animals you walk/sprint over.

Giraffes have been found in the following regions:

The Giraffe is actually a modified model of a Kudu. 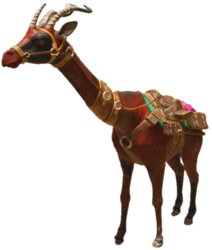